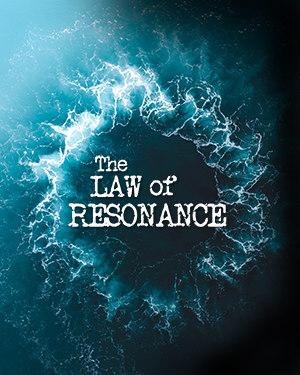 Absolutely everything in this universe that is perceivable including our physical bodies is made up of energy - vibrating in a bandwidth. The circumstances, events and conditions that make up our personal experiences of physical life as well as events, conditions, etc. that are constantly evolving in the universe, are brought about as a direct consequence of the law of resonance.
According to the law of resonance, when two vibrating systems (e.g. physical bodies) come into contact with each other, the system with the stronger vibration will adjust the energy of the system with the weaker vibration. The body vibrating more weakly will adjust its energy (get entrained) to match that of the stronger vibrating body.
The effects of the law of resonance are apparent and recognisable in the people around us. We tend to describe another as being ‘on the same wavelength’, ‘in sync’, ‘tuned in’; or who gives off ‘good/bad vibes’. These are examples of how our vibrational frequency is affected by the law of resonance. All energy resonates at a specific frequency which allows only energy oscillating at a harmonious frequency attach itself, thereby creating the physical reality that one experiences. Understanding the law of resonance and recognising how it applies to every facet of our existence provides one with a frame of reference from which to begin to consciously and intentionally make the vibrational shifts necessary in order to start resonating with the vibratory frequency that corresponds to the desired physical reality and outcomes that one may envision and wish to experience in life. Being fully aware of and acknowledging this law is key to developing the ability to consciously direct and maintain the quality and type of energy vibrations that you want to be constantly projecting through your emotions, thoughts, and beliefs, which in turn attract to you the harmonious tangible results in terms of desirable outcomes, relationships and experiences.
As a corollary, the observation that one’s current perceived reality is a compilation of less than desirable outcomes, would be indicative of one’s vibrations being out of synch/phase (not in resonance) with that which one may desire for oneself. These are not random occurrences or acts of nature that are entirely beyond one’s sphere of influence or control and holding on to this erroneous though widely perpetuated belief, would only be self-limiting and keep one from reaching one’s full potential as a human being.
Thus consciously applying the law of resonance to one’s life is to become an active participant in the process of manifestation, becoming a co-creator of one’s reality. It means making choices that will shift your vibrations ever closer to the frequency one will resonate with and be tuned to the desired circumstances, states and conditions - emotional, physical, spiritual and/or financial.
The law of resonance determines what one is going to be attracting into one’s life depending on the vibrational frequency of the energy (resonance) that one is projecting out into the universe.

The unwavering role of the law of resonance is simply to make sure that whatever it is that is meant to be attracted does get attracted and manifests based on the individual personal choices one makes. However, the quality and frequency of one’s energy vibrations is directed and controlled by oneself, through one’s emotional response system, conditioned by one’s psychological and spiritual state of being. They reflect and result from the decisions and choices made by one, which in turn are governed by one’s perceived view of the world and one’s belief system. Based on the vibratory output of the frequency emitted by one, the law of resonance works to determine all the other additional cooperative energy components that will get drawn to each other and bind together, leading to the energy from the unperceived spiritual or metaphysical realm that will undergo transmutation so as to produce the tangible physical outcomes, events and circumstances that one will eventually experience. In other words, every circumstance, occurrence and condition that one experiences in one’s life has been attracted to oneself on account of the law of resonance determining what energies in the universe are a match for the vibrational resonance one generates based on the way one perceives everything around in one’s physical existence.
The law of resonance functions in a completely neutral and non-judgemental fashion and in precisely the same way for each and every person, making no distinction or determination as to what one might perceive as being right or wrong, good or bad, moral or immoral, etc. Entirely unbiased about what gets attracted to one, it serves only as the efficient delivery mechanism, unfailingly delivering what one is asking for via their resonating vibrational frequency, the intensity of which is determined by the law of resonance. Therefore it is essentially the individual energy signal and personal vibrational resonance transmitted outward by one that determines the precise shape, colour, and quality, of the events, circumstances, relationships and life conditions to be encountered by one. Being that everything in the Universe exists as energy or light, at the most fundamental subatomic level, everything including the human body, thoughts, emotions, feelings, ideas, colours, sounds, natural phenomena, etc., all exist as vibrating energy packets referred to as Quanta. While they are composed of the same energy at their core, it is indeed the nature (and frequency) of the vibrational output of the energy which gives it different individual forms, properties and other physical characteristics, so that the only differentiating factor between, say, a table and a flower, and which determines the eventual physical manifestation of each is the varying vibrational intensities of their energetic make up.
It is important to understand what determines this personal vibrational resonance and the factors that influence the intensity of one’s outgoing vibratory emissions.

All the emotions that one chooses to experience generate a specific vibratory frequency or resonance which then gets projected outward to be amplified by the field where the mechanism of the law of attraction unwaveringly kicks into motion, consequently drawing in to one’s physical experience the outcomes and circumstances that correspond to the frequency being transmitted by oneself. As a result one begins to attract the situations, experiences, circumstances and people that match the energetic frequencies that one is putting out and therefore one is being given precisely what one has been asking for, no more no less.
The quality of consciousness that one is able to maintain dictates the resonance quality or vibrational intensity of the outbound frequency that one projects, which in turn determines what one will attract and pull into one’s life.
Hence, resonance is basically the mechanism that initiates and amplifies a vibratory response (serving as a link) in a receiving system which has been attuned to or is in vibrational resonance with an emitting system thereby creating an outcome. However resonance can occur only when the emitting system and the receiving system are identical or very close in frequency and are therefore able to harmonise, which then allows the law of resonance to determine what is to be drawn to one.
One’s individual thoughts, emotions, perceptions and beliefs directly influence the vibrational intensity of the energetic frequency emitted. The outbound vibrational resonance generated by negative emotions such as anger, fear, grief, anxiety, apathy, etc is very different from that of positive emotions such as love, appreciation, joy, compassion, gratitude etc, and will consequently attract singularly different outcomes, just as in tuning into different radio stations to receive different outputs.
Effectively, whatever it is that one is vibrating on, be it in the initial thought stages, or the more developed feelings stage, right through to fully developed intention or will, one is in effect transmitting one’s requisition to the universe to deliver to one, more of the conditions, outcomes and experiences that are a close vibrational match to one’s true self. One should not expect to attract abundance or prosperity if one continually focuses on lack, just like focusing on mistrust can never attract trust, nor will focusing on ill health attract good health. If fear or shame is constantly on one’s mind, endless opportunities to experience fear and shame will be presented to one. Simply put, emitting an outbound frequency of fear cannot draw back to one something worthy of love - for fear and love are far apart in their vibrational intensities and the varying frequencies differentiating these predominant states of being from each other are determined by the law of resonance. Interestingly, the frequency emitted through love is of considerably higher vibrational intensity than that of fear and has far greater power to easily draw to one the things one loves or desires - over what is feared.